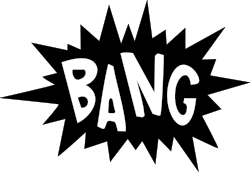 Another game that my students love is called Bazinga!  I cannot take credit for this; I found it on Pinterest as well.  Here is the link to the original teacher’s game.  I love the Big Bang Theory, too, but this game can be played without any knowledge of the show.  (However, it is hilarious!  I would suggest watching it!)

You can use this game to review any topic.  I typically have four teams, but I have smaller classes.  Depending on the class, I will have my students who are not answering the question write down the answer.  This way, they are also receiving the review.  I decide questions ahead of time.  If the team answers the question correctly, they receive a point.  They also draw an extra piece of paper.  The extras are listed on the original post.  They differ from getting two extra points, taking points away from another team, or switching players.  As the teacher listed in the original post, I have popsicle sticks, so I draw the two players who switch.  The students really enjoy this game, and they like to play it.

I do have a few variations.  I have students do jumping jacks instead of push-ups.  Sometimes I do not include the switching of a player from the winning team to the losing team.  This is usually because I would have to sort the popsicle sticks, which would take too long.  Sometimes I number the extra statements, and the students pick a number instead of drawing them.  This also speeds up the game.  Other than that, I suggest that you try this game with your students!